Should Spain and Portugal jointly boost investment in infrastructure of rail transport? This is a question that is currently on the minds of the operators and actors active in the rail transport sector on the Iberian peninsula. To coincide with the European Union’s goals on sustainable development, the sector still has a long way to go to garner a portion of the market share currently occupied by maritime and road transport.

“The Portuguese and Spanish governments should increase their budgets for rail and port infrastructure” is the European Commission’s recommendation. Portuguese ports are considered as potential European import hubs because of their geographical location on the Atlantic coast. In this context, investment in port and rail infrastructure should be encouraged. The European rail system transports around 1.6 billion tonnes of goods each year. Rail transport is fundamental to the European Union’s strategy for a more sustainable transport sector, for economic and social cohesion and for connecting European countries within and between Member States.

Some of the main European modal corridors link Portugal and Spain, thus contributing to the improvement of connections between the centre of the EU and its peripheral regions, whilst strengthening the position of the Iberian Peninsula as a portal to Western Europe.

There are two main European corridors entering the Iberian Peninsula: the Atlantic Corridor and the Mediterranean Corridor. Looking at the Spanish rail network, we have the Atlantic corridor, which connects the French border of Irun/Hendaye with Portugal via Vitoria, Burgos and Valladolid, with a branch that goes south via Madrid, Lisbon and the port of Algeciras. The Mediterranean Corridor runs from the French border at Portbou/Cerbère to the port of Algeciras and Seville along the Mediterranean coast, through Barcelona and Valencia. In  Portugal, the Atlantic Corridor begins in Lisbon and the port of Sines, then moves eastwards through Spain (through Badajoz-Elvas). Another branch goes to Aveiro and Porto, and then moves eastwards to Spain through Vilar Formoso-Salamanca.

“The mission of the Atlantic Corridor principally covers the management of existing infrastructures, without additional investments, through centralized management of capacity allocation, traffic management and costumer relationship.” This project arose with the common objective of the governments of Portugal, Spain, France and Germany to increase the competitiveness and modal share of international rail freight transport and to jointly overcome technical and operational barriers. The Atlantic Corridor is integrated into the Trans-European Transport Network (TEN-T) and is connected to the Mediterranean Corridor and the North Sea-Mediterranean Corridor. The extension of the Atlantic Corridor to Germany will allow direct connections with two other corridors, namely the Rhine-Alps and the future Rhine-Danube.

With a total length of more than 6,200 km, the main heterogeneous technical characteristics in terms of infrastructure that need to be improved stand out: the presence of the European gauge (1435 mm) in France and Germany and the larger Iberian gauge (1668 mm) in Portugal and Spain; electrified sections with differing voltages; and different signaling systems. The aim of the Atlantic Corridor is to coordinate investment in order to homogenize the technical characteristics of the infrastructures throughout the participating countries in this project.

EU railways continue to grow. Rail markets are gradually opening up and safety levels remain high. This sector is increasingly demanding more innovation and responsiveness to customer needs. Rail transport’s fight to increase its modal share continues to center around interoperability and cross-border coordination issues. Corridors are essential elements of the Commission’s policy to boost rail freight transport. If the sector can convince haulers to opt for rail motorways to reduce costs, and exporters and importers to transport their freight to ports by rail, it is very likely to grow in the coming years and thus continue to align itself with the EU’s mission towards the sustainable development of transport on the continent.

Intrigued? The Escola will delve into these and other railway related subjects in great depth during the upcoming Port2Rail course, set to take place in October 2019. Check out the course programme here. 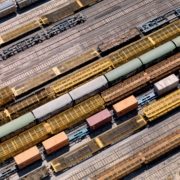