If you work in shipping and after seeing this number the first thing that comes to your mind is EMISSIONS, then you are on the right track!

In the previous Blue Innovation post we talked about the OPS as the means to control emissions in ports. However, seafarers have a saying that says “A ship in port is safe; but that is not what ships are built for,” which reminds us that a ship spends most of its life time in navigation. Even though emissions in port directly influence the communities nearby, the emissions from ships affect the environment in general.

It is not a new development for the IMO to work towards environmental responsibility. Since 1997 it has officially had the MARPOL Convention. In terms of emissions, by 2005 chapter VI of the convention has entered into force which aimed to control SOx, NOx, and other particle emissions that affect the earth’s ozone layer. Each year there is more responsibility and pressure coming from the IMO, encompassing the complex discussion of measures in favour of the environment within the complex understanding of the great changes and challenges involved in the issue. The complexity is there as it is a decision that calls for the necessary initiatives and technologies to be able to improve (decrease) emissions, considering the responsibility implied by the potential incidents that would affect the means of transport that mobilises 80% of the world’s goods.

The IMO has been known to set emission guidelines for decades, however quite a bit of controversy has surrounded the 2020 expectations. For instance, currently the global limit of sulphur contents of ships’ fuel oil is 3.5% and with the entry into force of the new limitations on the 1st of January 2020, emissions will need to be reduced to 0.5% SOx. The ECA zones will not be affected with this limitation, as these emissions have already been limited in 2015 from 1.0% to 0.1%. 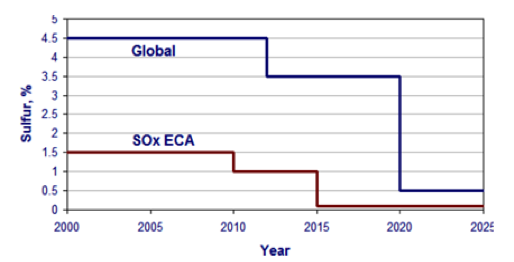 What do all these changes mean and how to they relate to our Blue Innovation section? In this issue many of the alternative solutions to the challenges set by the IMO 2020 regulation will be listed, which will then be provided with source links for anyone wishing to delve deeper into the subjects.

In a way, as a consequence of the global concerns and pressures to tackle climate change, technological developments are the ones that are going to be able to face all these changes with the smallest possible impact on the global economy. This signifies the need to not only change the fuel type used by commercial vessels, but the logistics of bunker supply, adaptation of machinery and installations and procedures that take a lot of time as well, especially when thinking about more than 95,000 merchant ships worldwide.

On the other hand, some proposals include the use of hybrid systems combining of diesel-electric, gas-electric or even ones relying solely on electricity. The first are systems that combine the operation of a fuel for the generation of energy that is stored in batteries and used according to operational needs, thus distributing and optimizing emissions. It is also true that since 2015 fully electric ships have been a reality in the market, but due to their short autonomy, they have not spread out.

Wind propulsion has also been a part of the proposals. It contemplates (depending on the type of vessels) the possibility of implementing systems that help propulsion through the use of wind force. Some examples of such systems are DynaRig, Flettner-Rotors and even research projects such as Wind & Solar Power for Sustainable Shipping or the Kite propulsion system. These systems are not intended to replace the engines but can compensate an operational process of slow steaming without resulting in significant changes in the journey. 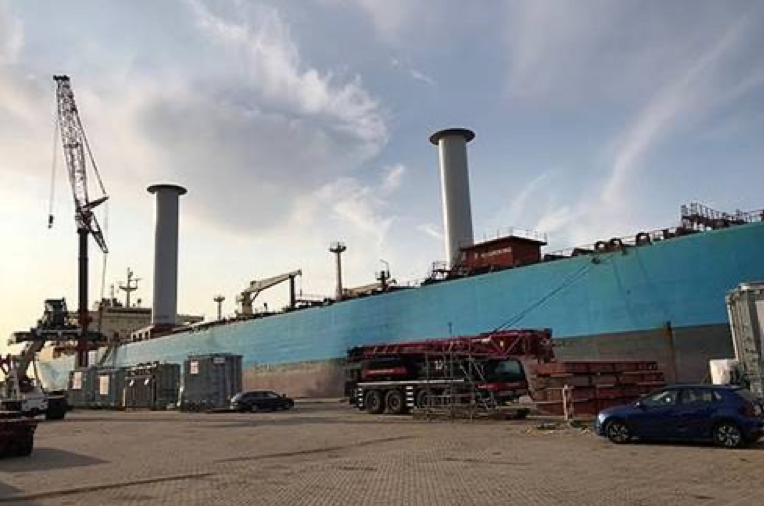 Alongside the previously mentioned alternatives, there are after-treatment emission control systems such as Integrating SOx and NOx Abatement, Selective Catalytic Reduction or scrubbers which, despite their investment, have come to be seen as viable options for shipping companies in which open (sea water) or closed (fresh water) systems function as filters to reduce PM by 80% and SOx by up to 98%.

The availability of so many alternatives does not mean that following the IMO rules will be easy. Many of the proposed solutions require a lot of investment, result in large operating costs, require major changes in systems and equipment or massive supply capacities for fleets. Each shipping company will have to adapt according to their routes, facilities and structures, and choose a system that complies with emissions regulations.

All of this is accompanied by other alternative technologies that, while not necessarily reduce emissions, help in the performance of the ship and therewith improve its overall environmental footprint. The improvements could be new aerodynamics, low resistance paints, trim optimization, optimization of aerodynamics of propellers and rudders, optimized pumping in cooling systems, and even the use of big data to improve the sensors in equipment and prevent excessive consumption by optimizing the maintenance or the use of data to predict optimal routes according to environmental conditions.

There is no doubt that the Blue Economy will be affected by the 2020 regulations. The world’s waking up to the threats and dangers posed by climate change, and all of the world’s industries are adapting. The maritime world will perhaps be the one most affected by the new rules as, being responsible for 80% of all trade in an increasingly globalised society, it is one of the more significant polluters. As in any case though, challenges bring new and innovative solutions, and we are very excited to see what the industry will bring in the coming years to continue to innovate and protect our Blue Economy.