In 2019 the Escola’s team has decided to take it upon themselves to carry out a research study on the current state of experiential training offers in the areas in which the Escola is active. This study was borne out of the recognised need to understand the exponential changes that are happening in the world of transport in light of the fourth industrial revolution. This is particularly true when dealing with professions in the Blue Economy, which hosts the majority of the global international trade. The Escola’s team hoped to conclude that there is a rapidly growing need to adapt training programmes of professionals hoping to enter the maritime world, to help counter this reality and thus better prepare the individuals for the industries.

The resulting study showed that when synergies are created in a network of training centres and companies in the sector within a country or between different countries, the result is rapid learning and the creation of innovative training programmes, which better prepare the professionals for the jobs of the future. Using data data collected from training centres and companies that frequently collaborate in the Escola’s courses, the team concluded that the courses offered by the Escola have a format that is both innovative and experiential in nature, and thus by internationalising and mixing the groups, the training is more successful and current to the needs of the market. It is important to develop tools and course models for training centres and companies to follow, and to ensure that more students have access to them. The final paper can be downloaded from the Escola’s website. 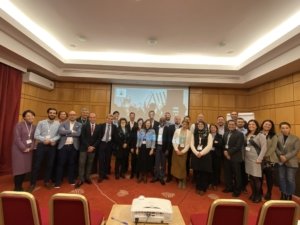 At the end of November, the Escola’s team then travelled to Portugal to present the findings at the first annual World of Shipping International Conference on Maritime Affairs, which took place in Carcavelos between the 21st and the 22nd of November. During the conference topics such as improved waterborne transport concepts, energy efficiency and emission control in waterborne transport concepts, optimisation of transport infrastructure including terminal, the port of the future, the autonomous and unmanned vessels, complex and value – added specialised vessels, and digitalisation were covered in other studies presented by scientists, researchers and industry professionals from around the world. The conference, which had its pilot event this year, aims to establish itself as a meeting point of reference bringing together the industry, leading academic scientists, researchers and research scholars to exchange and share their experiences and research results on all aspects of maritime transport to promote a better future for the industry.

Interested to know more? You can contact the article authors to enquire about the study itself or any future research planned.