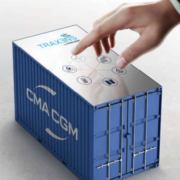 The world of transport is no stranger to the continuous advances in tracking technologies. Since the invention of the global positioning systems and their implementation in the transport sector in the ‘90s, the need to monitor the placement of individual containers during a shipment has become more common. This was advantageous both to the clients sending the units as well as the shipping lines managing the processes. All parties involved could essentially reap the benefits of tracking shipments during deep and short sea shipping crossings.

In today’s climate, simply tracking the “global position” of the container isn’t enough. It now involves the incorporation of alternative functions designed to benefit the customers. The (now) outdated security seal of the containers has morphed from simply being an evidentiary device aimed to deter theft into an in-situ electronic system that detects vandalism activities. Moreover, just like mobile phones, the E-seal has outgrown its original goal. It has diversified so much that it can be considered appealing for its added value functionalities just as much as for its original purpose. 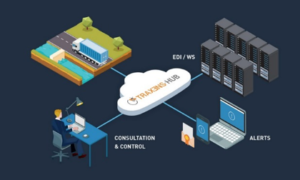 Some of these added extras include the internal and external control of temperature; a warning notification preceding an attempt to compromise the equipment; humidity control and monitoring inside the unit;  status updates and warnings during intermodal transfers or at physical access points; systems of impact detections on the unit; constant real-time monitoring and easy access through the internet or a mobile device; possibility to customize notifications in case of speeding or access points checks; history of the unit route; the possibility to open doors at defined access points; as well as enabling the opening of the unit when pre-set date and location parameters are met. All these added value functionalities have transformed the traditional container into a more intelligent, accessible and traceable unit that makes integrating data for the best logistic control of those involved in the movement of the merchandise possible. 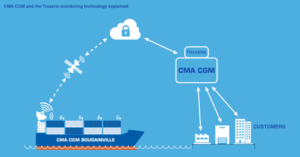 In 2016 the TRAXENS company in charge of creating hi-tech devices for real-time monitoring has joined forces with CMA CGM to develop a device that complies with many of the aforementioned functions in order to generate Big Data for the different stages of the intermodal transport operations and to improve services for their customers. The device can provide updates on the location, temperature, humidity levels, vibrations, impacts, attempted theft, customs clearance status among others with the additional ability to remotely control functions.

Recently the MSC shipping company has joined the TRAXENS – CMA CGM alliance and has already begun the incorporation of 50,000 “Smart containers” in its operations to offer better visibility, control and monitoring of data for its customers. Moreover, since 2016, Maersk in conjunction with a US-based startup SensorTransport has worked on the development of a Remote Container Management System which offers similar services.

The way transport operations are carried out is constantly evolving, and with the help of the technological inventions, it shows no sign of slowing down. The Smart Containers are proof of that. They not only create significant added value to the customers, but they have (and will continue to do so) greatly contributed to the future of transport, logistics and blockchain through the contribution of Big Data. It will surely be fascinating to see what other solutions transport companies come up with in the coming decades to further modernise and perfect the intermodal supply chain.

For more information you can go to:

The historic gap with the northern ports begins to fade.

The ports of Southern Europe are moving towards a rebalancing of traffic with Northern Europe. The old aspiration of the main ports of the Mediterranean to reach the quota of 40% of the European maritime market is still distant in terms of total traffic, but it took a major a step forward in the container market. The index of the 25 European ports with the most movements in TEUs in 2017 has 14 enclaves from the South of the continent, which account for up to 36% of container traffic. A significant percentage if we assess that three years earlier this percentage was only 25%.

The same analysis of the evolution of the total port traffic dilutes the contribution of the southern ports to a percentage lower than 30%. At the same time, the number of ports of this facade in the ranking of the top 25 of the continent is limited to ten. Regardless, the index also shows a positive evolution in the South of Europe, as the first 15 ports show a growth of 4.3% in 2017, almost double that of the 15 largest ports in the North, which showed a 2.3% increase.

Despite this, this growing trend of southern European ports coincides in a context of growth for the giants that make up the axis from Le Havre to Hamburg, historical leaders of maritime traffic on the continent. Rotterdam continues to increase its dominance in the European ranking, with a growth of 11% in 2017 in the container segment, reaching 13.7 million TEUs moved through its docks; while Antwerp achieved a 4.1% growth in 2017, with 10.4 million TEUs.

Hamburg was the exception, losing 1% of traffic, with 8.8 million TEUs; while Bremen achieved a slight increase of 0.9% by processing 5.5 million containers last year.

After these first four positions, European container traffic moved to Spain, which in 2017 holds three enclaves within the continent’s elite. The results at the end of the year show that the port of Barcelona joins Valencia and Algeciras in the European top 10, after registering a spectacular growth of 32.2% in number of TEUs transported in 2017, the largest percentage increase of the entire European port system with almost three million units. The Catalan enclave recovers the position that it occupied in 2007, before the economic recession, and now the number of moved TEUs is almost 14% higher than that registered that year.

For its part, Valencia increased its traffic by 2.1%, to 4.8 million TEUs, and snatched the fifth place from Algeciras, with 4.3 million TEUs and a sharp decline of 7.9%, due, among other factors, to the stowage conflict, which affected the Andalusian port more than other Spanish enclosures. It also highlights the growth experienced by another Mediterranean port, the Greek port of Piraeus, which transported more containers than in 2016, grew a 10.5%, and surpassed the figure of four million containers.

More growth in the Mediterranean

Expectations for 2018 also point to the fact that this growth will continue in the ports of Southern Europe, according to the latest Global Port Tracker report prepared by Hackett Associates. According to the forecasts offered by this maritime consultant, in 2018 there will be an increase of 6.2% in total imports to Europe, with 25.7 million TEUs. Specifically, it expects Northern Europe to increase its traffic by 5.6%, to 16.06 million TEUs, while pointing out that the Mediterranean and the Black Sea region will achieve a rebound of 7.2%, with a prediction of 9.64 million containers.

For its part, the forecast of exports made by Hackett Associates for the year 2018 projects an increase of 5.8% for Europe, with a total of 22.11 million TEUs, with Northern Europe increasing by 3.7%, reaching 13.66 million containers; while the Mediterranean and the Black Sea regions will achieve an increase of 9.4%, transporting up to 8.44 million units.

Overall, according to the calculations offered by the consultancy, the Northern ports would accumulate a total volume of 29.7 million containers in 2018, reducing their quota to 62.1%; while the southern enclaves of the continent are expected to achieve a total of 18 million TEUs, increasing their participation to 37.9%, which would confirm the upward trend of the growth of these ports in recent years.

Hacket Associates’s report places the port of Hamburg as the main victim throughout 2018, “affected by the reduction in transshipment services to the Baltic and the fierce competition of Rotterdam.”