Quality does not happen on its own!

The Quality Manager (QM) and the Director of the Escola supervise each course programme.

At the end of each course the participants complete an evaluation questionnaire. With the responses the QM elaborates a final report of the course. This report is sent out to the teachers and evaluated for future courses. Once a year all the final reports and the average statistics are reviewed by the Academic Committee in detail.

Each course is audited individually. The following aspects are rated:

Since its inception the Escola established a symbol of quality to distinguish those people and institutions that help carry out the courses.

In its tenth anniversary the Escola gives form to the original idea and puts it into practice by creating the Arete Excellentiam and Arete Aurum distinctions.

The first is dedicated to the institutions and training centres, and to their representatives and collaborators who contributed with their work and dedication to the development of the Escola’s courses.

The second is awarded to people who for their attitude and acts gave a decisive impulse to the creation and growth of our institution. 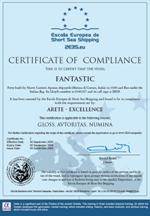 The certificate of compliance:

The facilities, ships and trains that serve as classrooms where the Escola’s courses take place have been awarded with the ARETE EXCELLENCE certificate crediting that they provide the appropriate space and means to host the courses.