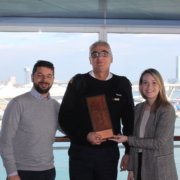 This December Marta Miquel, Chief Business Officer of the Escola Europea – Intermodal Transport, delivered the Arete metope to certify the Excelsior vessel of the shipping company Grandi Navi Veloci (GNV), which operates the Tangier-Barcelona-Genoa route, as a classroom of the Training Centre. The certificate has been delivered to Commander Alessandro Fantini and Valerio Esposito, the GNV representatives in Barcelona, ​​and has immediately been placed in a pre-eminent place on the bridge of the vessel. This certificate indicates that the vessel meets the quality requirements established by the Escola to host the MOST courses (Motorways of the Sea Training).

The Arete award comes from the Greek word for “excellence” (Ἀρετή). In ancient Greece it was an important part of the education of young Athenians (Paideia). It included physical training, for which the gymnasion was created, and mental training, which gave the population skills of oratory, rhetoric, basic sciences and spiritual formation. All these disciplines serve as inspiration for the Escola, which emphasizes that the vessels in which the courses take place must be able to adapt to this type of training (updated with the requirements of modern training).

Other recipients of this award include the Cruise Rome and Cruise Barcelona vessels of Grimaldi Lines, the GNV vessel Fantastic, Tanit from Cotunav, the Aula dels Estels at the Drassanes terminal and the Europa classroom at the BEST terminal (both in Barcelona).